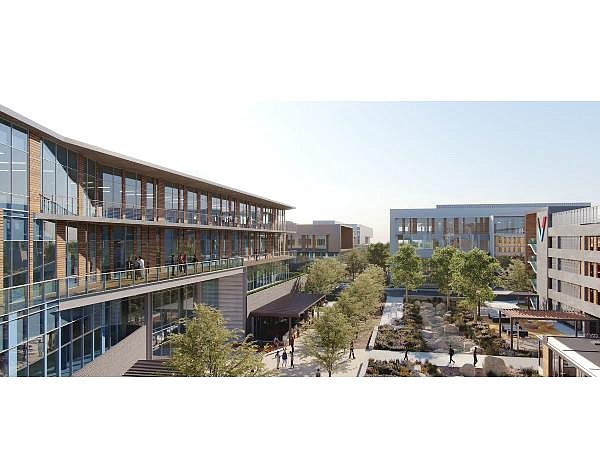 Merlone Geier Partners is now on the clock to kick-start redevelopment of the former Laguna Hills Mall.

Earlier this month, the San Diego-based retail developer received city approval to proceed with a redesigned mixed-use project at the 68-acre site, just off the San Diego (5) Freeway and El Toro Road.

In total, the project, now called the Village at Laguna Hills, will see construction of up to 250,000 square feet of retail, up to 465,000 square feet of office space in four buildings, a hotel with as many as 150 rooms, and about 1,500 apartments in five different complexes, including 200 units of affordable housing.

The project will be built in phases, with city expectations that it will be completed in 15 years, though a few extensions beyond that time period could be made.

Overall, the cost of construction for the long-awaited project is estimated at $130 million, according to city records.

Merlone Geier will pay in excess of $20 million in various development-related fees to the city as part of the new agreement, records indicate.

The developer expect the site to create over 3,000 construction-related jobs, including over 1,500 indirect jobs, and over 3,500 full-time retail, office and hospitality jobs.

With city approvals now complete, the developer is turning its attention toward kicking off work at the long-awaited project, set to be the biggest mixed-use development in South Orange County in years.

The beginning of construction in a “best-case scenario would be six months, but it will most likely start in the next 12,” Stephen Logan, Merlone Geier VP of development, told the Business Journal.

The developer hopes to complete the project’s first phase within five to seven years, according to Logan.

That initial phase includes the office component of the project, alongside the hotel and about half of the residential and retail portions of the Village.

“This is [now] a true mixed-use project in South Orange County,” Logan said. “We think having all those different components is going to be dramatic for South Orange County and this shift will make it a better place for everyone to visit.”

Groundbreaking has been a long time coming for the site.

An earlier redevelopment plan for the property envisioned a larger retail footprint at the site, but subsequent closures of the mall’s Macy’s and JC Penney stores led the developer to rethink the project; it bought both shuttered sites and has closed and razed other large portions of the original mall, whose planned redevelopment was previously called Five Lagunas.

The developer substantially reduced the proposed retail space in favor of additional office spaces and residential units in its latest plans.

More demolition’s in store before ground-up construction kicks off.

Before it can begin building, the developer still has a “ton” of demolition to do along with the implementation of infrastructure such as sewage, electricity, water, roads, sidewalks and landscaping, Logan told the Business Journal.

City filings indicate the first phase will see the construction of a 100- to  150-room hotel, a 2.6-acre park, retail buildings totaling at least 140,000 square feet and at least two apartment complexes.

Phase two will see the completion of the remaining residential buildings and at least 90,000 additional square feet in retail.

Merlone Geier will hold on to the retail portion of the project and develop it itself, but plans to sell the land at the site for the hotel and apartments to other developers.

Plans for the site’s mid-rise office buildings are yet to be determined, according to Logan.

Although the company is currently marketing the space to different tenants, Logan said it’s open to either leasing to a tenant that wants Merlone Geier to develop the space, doing a joint venture with an office developer, or selling the site altogether.

The four-building office project would be the largest of its kind in South OC in well over a decade.

Although the pandemic caused a surge in remote work, the developer is “bullish” on the potential for office spaces, Logan said.

“There are still major players that need office space in order to commit long-term,” including those in industries such as entertainment and life sciences, he said.

“Because of the proximity of this site to San Diego, Orange County and the Inland Empire, it will attract a ton of talent.”

While the site will see an array of new retailers, a handful of existing tenants – King’s Fish House, In-N-Out, BJ’s Restaurants and Brew House and Nordstrom Rack – will remain on site during construction, according to Logan. Together, they total about 25,000 square feet.

While the three restaurants will remain in their existing buildings, Nordstrom Rack will relocate “probably under the [site’s new] theater,” Logan said.

The developer is looking for restaurants and big-box retailers as well as fast casual eateries and small, boutique retailers to eventually fill its retail space once move-in dates become clearer.

The site’s theater has also drawn a lot of interest from potential tenants, Logan said.