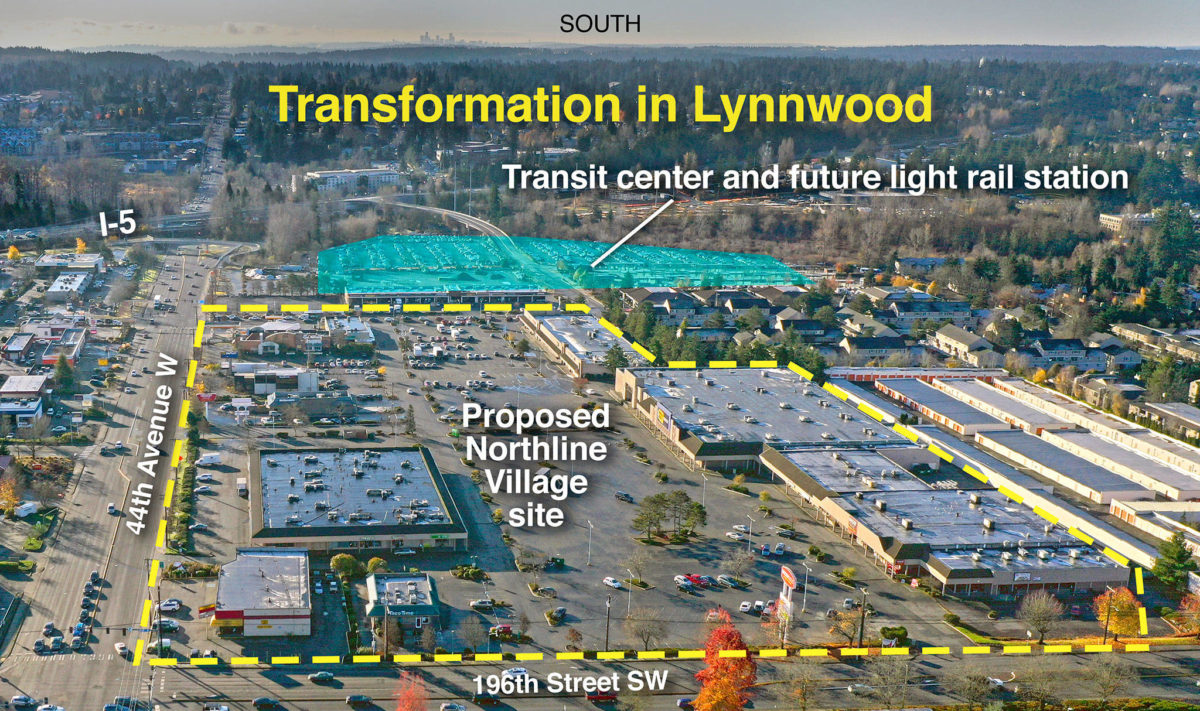 LYNNWOOD — Transportation has long been part of Lynnwood’s history.

At the turn of the last century, Alderwood Manor was created when chicken farms and small ranches popped up at the Alderwood stop of the interurban trolley that connected Everett and Seattle.

Then the Lynnwood neighborhood spawned in the 1930s as a growing cluster of businesses began to line Highway 99.

And when I-5 opened in the 1960s, strip malls and restaurants surrounded the interstate and boosted traffic for the young municipality.

“When we bought this property in 2014, we knew the city had pretty big plans,” said Jamas Gwilliam, vice president of development for Merlone Geier Partners, the West Coast firm behind Northline Village. “We see a lot of value in these municipalities that have the foresight and put the planning efforts ahead of time to make this kind of redevelopment possible.”

The land is within walking distance of the city’s planned transit station. Now the 18-acre plot known as Lynnwood Square houses a Grocery Outlet, some restaurants, a defunct furniture store and Best Buy.

Lynnwood’s changing skyline comes as the city’s population continues to grow, with a total of about 39,600 residents, a 10% increase from 2010, according to the state Office of Financial Management.

Northline Village is one of many projects spurred by the booming population and incoming light rail, which is set to open in 2024.

“If we need to grow, let’s grow so we can utilize public opportunities,” Almgren said.

Lynnwood’s light rail station is expected to serve up to 55,000 riders per day by 2026, according to Merlone Geier Partners.

The passage of Initiative 976, the $30 car tab ballot measure, poses a potential threat to light rail’s northern expansion. But at a Sound Transit board meeting Thursday, CEO Peter Rogoff said projects that have already started, like Lynnwood Link, would likely be unaffected.

Proximity to transportation isn’t the only benefit to the area, though, Almgren said.

The city center is located in an opportunity zone, a designation granted by the federal government which gives tax breaks to business investors.

Within the proposed development, trees would line walking paths and the roads, which could be closed for special events. Kiosks, storefronts, outdoor dining areas and a plaza are expected to draw pedestrian traffic.

The project’s green spaces, called Pocket Oasis and Village Green, would include areas for pets to roam, a play space and a water feature.

Maintaining elements of nature was one idea that stemmed from four meetings with the Lynnwood City Council and other outreach, Gwilliam said.

“We really embraced that because we find similar value in prioritizing the right amount of open space,” he said.

There’s no timeline for completion of the project. The exact design also hasn’t been completed. Almgren said construction will likely occur in phases, within the 15-year development agreement.

“Everyone’s interested in moving as quickly as we can,” he said.

Gwilliam said that while the project is in early stages, the site plan likely won’t change much.

One factor that could disrupt construction would be an economic recession.

Lynnwood residents will have an opportunity to give their input on the project during the Dec. 9 City Council meeting.