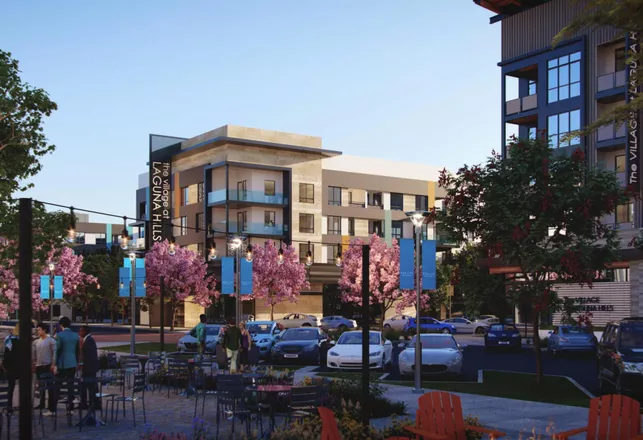 Beleaguered malls across the country have been getting face-lifts over the past decade as developers look to breathe new life into outdated shopping centers by adding mixed-use elements like apartments, hotels and creative offices.

For one developer — West Coast retail investor Merlone Geier Partners — the process to repurpose the shuttered Laguna Hills Mall in Orange County has highlighted the challenges to what has proven to be a time-consuming and expensive process filled with red tape.

But now, nearly a decade and several proposals later, the finish line is in sight.

Laguna Hills Mall is far from the only Southern California mall in line for reboots, with others including Orange County’s Main Place in Santa Ana, the Westminster Mall and LA’s former Westside Pavilion undergoing their own redevelopment process. This trend is by no means a new one — it kicked off in earnest long before the coronavirus pandemic — but despite the lack of novelty, the expensive and lengthy process has kept many from successfully winning approvals and starting construction.

Still, experts on retail, development and land use seem confident that this trend will only continue to grow in prevalence across the U.S. as developers seek to revitalize indoor mall sites that were built for a different time.

Retail watchers have been sounding the bell for years about the over-retailing of the U.S., which has more than triple the amount of retail space per person than Canada. Many regional shopping centers were built between the 1960s and 1990s with between three and five department stores, Maloney said. As the market has changed, those stores’ popularity has waned and locations have shuttered.

The central locations of many of these malls have driven interest from both CRE players and residents looking for a new mix of in-demand options, making them ripe for redevelopment.

These projects aren’t for the faint of heart: Maloney tells clients looking to pursue these redevelopments they should plan on at least two to three years to get through the approvals process, though that number fluctuates depending on the size of the project.

This entitlement process, even if it’s just two years, means there is time for the market to change in ways that might affect what types of uses — and at what scale — go into a project, according to Cox, Castle & Nicholson partner Margo Bradish, who is not involved in the Laguna Hills project but has worked on similar ones elsewhere in the state. For that reason, flexibility, and often patience, is a requirement.

That has been the case for Merlone Geier, which first bought the Laguna Hills Mall in 2013 from Simon Property Group; the mall was first built in 1973. The acquisition came with approved plans for a remodel that would replace older sections of the mall with updated retail uses.

About a year after Merlone Geier’s purchase, Sears, which had a store on 15 acres at the 68-acre mall site, announced plans to close that location. Merlone Geier bought out their leasehold interest and closed its store in 2014. This prompted Merlone Geier to expand its vision for the property, and shop new ideas with the city, nearby residents and stakeholders.

In 2016, Laguna Hills approved a mall overhaul that would include 880K SF of both new and renovated retail space plus nearly 1,000 residential units, movie theater uses, medical office space and restaurants, according to city records. The approved plan was known as Five Lagunas.

Merlone Geier started early construction work in 2016 and anticipated that the new “urban village” would be up and running by the spring of 2018, the Los Angeles Times reported.

But in the latter half of 2017, after Macy’s said it planned to close its store at the mall, Merlone Geier stopped work on the project and once again decided to rework the development, Merlone Geier Vice President of Development Stephen Logan told Bisnow.

Merlone Geier ultimately acquired the leases of Macy’s and JCPenney’s before both stores closed their locations at the mall by late 2018. Shortly after, the entire mall announced it would close by the end of the year.

After months back at the drawing board, the developer shared new plans with the city in 2019 that would focus more on homes and offices than retail; the plan included over 2,000 apartments, 800K SF of office space and 200K SF of retail.

“We had about 450 people at that community meeting,” Logan said. “It was not well-received within the community. They thought it was way too dense.”

Merlone Geier made additional changes as a result; this time, the plan stayed within the general plan and zoning requirements for the site. That version, called The Village at Laguna Hills, became the current iteration.

The proposal is noticeably scaled down from the prior version. It includes 1,500 apartments, 200 of which will be reserved for middle- and low-income; 465K SF of office space; 250K SF of retail; and a new addition of a 150-room hotel.

A sticking point from residents about the project is it will add less retail space than it is replacing.

“We’re obviously a big believer in retail,” Logan said, noting that the firm’s focus is retail properties on the West Coast. But in this case, Logan says less is more, and the project has an amount of retail appropriate for what the market can support.

“For us, it’s just having to be nimble and trying to figure out what the market wants,” Logan said.

A rendering of the 150-room hotel planned in the Village at Laguna project.

The balancing act between what a community wants and what the market will support is a recurring theme in these redevelopment projects. While it’s impossible to make everyone happy, involving and collaborating with the community is a key piece in successfully wrapping a redevelopment project, Cox, Castle & Nicholson’s Bradish said.

That involvement can be key in instances where there is community opposition to a project throughout the approvals process, Bradish said.

In those instances, they “can stand up in front of that city council and say, ‘We listened. Here’s what we did, and here are the things that we can’t do for the following reasons’ — really being more transparent about what’s feasible and what’s not,” Bradish said.

Next up for The Village at Laguna Hills: a city council meeting that could be the last step before Merlone Geier begins construction work.

That meeting has been pushed back at least twice, in part at the city’s request as it attempts to renegotiate some aspects of a development agreement.

At a June 2021 meeting, the city council detailed several points it’s interested in negotiating with Merlone Geier further, including potentially adding affordable housing that targets a lower level of income for tenants than is currently in the project.

Some public comments touched on this issue as well. The nonprofit group the Kennedy Commission, local affordable housing advocacy group Welcoming Neighbors Home and other advocacy groups have submitted joint public comment letters for this project. Cesar Covarrubias, executive director of the Kennedy Commission, said his group would support the project if plans were amended to include units for people making very low incomes, such as residents who will work in the stores and restaurants at the new development.

A two-person household making $80K would be considered low-income in Orange County, where the area median income is over $100K.

Some council members who wanted to see more affordable housing pointed out all the cities in the state have to create a set number of affordable units by 2029 according to the regional housing needs allocation for affordable housing. Many cities are not on track to meet those set goals, and Laguna Hills is one of those cities falling short.

Speaking about the continued deliberations of the city council, Logan said “they’re being very careful in what to approve and how to approve it, and making sure that the city has the best deal they can moving forward.”

This patience has been tested; in September 2021, the developer sent a letter to the city saying it was tired of delays and “troubled by yet further delay in Council action on applications deemed complete nearly ten months ago.”

“No one wants any legal action, it’s not productive on either side of the coin,” Logan said, addressing the letter. But he added, “There’s a business point in time, where we’re going to be flexible on certain things, but then there’s certain things that we can’t be flexible on.”

The community and the council want to see the project built quickly, according to interim City Manager Kenneth Rosenfield. They want to see the return of retail to the site and enjoy new city revenues from the hotel, he said.

“I think all parties have slightly different expectations and desires. But the bottom line, if you put those all together: Building the entirety of the project as soon as possible is what’s desired,” Rosenfield said.